The scale is like F major, only with two G3´s. But due to the different tongue size, the two tones have a slightly different timbre

You can tune and retune it like all Klanauge.

The Klangauge® is a tunable slit drum made primarily of metal. It follows the pentatonic scale,
and is sometimes referred to as the steel tongue drum or simply steel drum.
The Klangauge® is similar to a singing bowl, and also produces overtone-like sounds.
However eight distinct sounds can be produced.

Our customers often ask us whether the Klangauge® is a Hang, which is another type of percussion instrument. In reality, it is not.
However, the development of the Klangauge® was largely influenced by the Hang, which was our greatest inspiration.In the end we have
created an instrument whose physical properties of creating a sound are unrelated to and independent of the Hang.

The Klangauge® is tuned with magnets on the underside of each of the tongues. This allows the user to tune each tongue.

The Klangauge can be tuned and retuned with the magnets

Other customers have also bought the following items 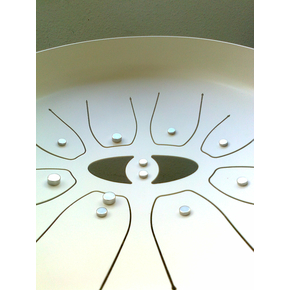